Samuel Eder was born in 1996 and started his musical education at the age of 8. After graduating from the high school with a major in classical music, he did his military service at the military music band in Bregenz (Austria). In 2015, he started musical studies with Professor Francesco Negrini and after graduating with outstanding honours, he continued his studies in Zurich with Professor Fabio Di Casola and in Vienna with Professor Reinhard Wieser.

In addition to his academic pursuits, he has attended classes and lessons with well-known soloists and orchestral musicians, such as Alexander Neubauer, Manuel Gangl, Karl Leister, Francois Benda, Heinrich Mätzener, James Campbell and Giora Feidman.

Throughout his career as a clarinettist he has played with several professional orchestras, such as the Vorarlberger Symphonie Orchester with guest conductor Kirill Petrenko, City Light Symphony Orchestra, and several youth orchestras, such as Neue Philharmonie München. He regularly performs with different ensembles at festivals such as Wien Modern, Bodenseefestival and Ars Braemia. 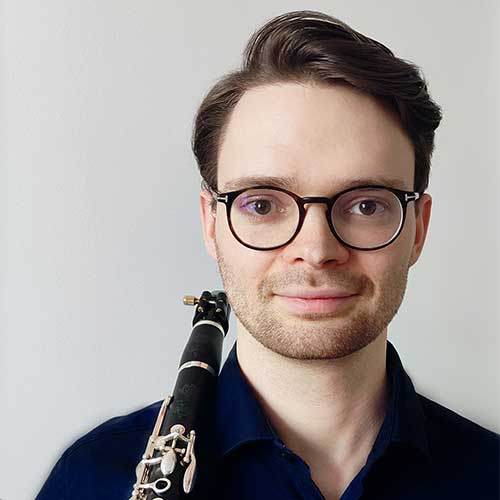 Katarzyna Mrozek is a sophomore Master’s degree student at the Krzysztof Penderecki Academy of [...]

Kamil Kuc has been an oboist of the Artur Rubinstein Łódź Philharmonic Orchestra since 2020. He [...]

Jan Styczyński was born in 1998 in Grodzisk Wielkopolski. He is a graduate of the Mieczysław [...]

Przemysław Przygoda graduated with the Master’s degree from the Karol Lipiński Academy of Music [...]